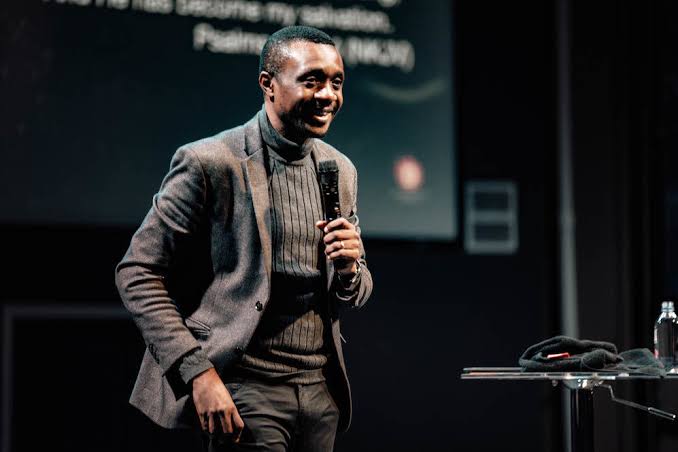 Nathaniel Bassey is a worshiper, gospel singer, songwriter, producer and trumpeter, he is famously known for his ‘hallulia challenge’ an Instagram programme where he worships God for an hour. Onise Iyanu, Imela, and book of life are his famous songs that he is recognized for.

Continue to read more as we unveil to you Nathaniel Bassey biography, age, career and songs.

Nathaniel Bassey was conceived on the 27th of August 1978, at Lagos Nigeria, he hails from Ikot Ofono Ikono, Akwa Ibom state , Nigeria. He is currently 42 years as of August 27th 2020.His father, Mr Joshua Bassey was a Pastor of the Apostolic Church, Bashua Assembly

While growing up, Nathaniel wanted to be a super Jazz musician doing Afrocentric, Jazz, highlife etc. As a result, he went about playing Jazz with his trumpet at parties and clubs, he participated in Spectrum 4 quartet, got invited into Steve Rhodes orchestra group where he played for 2years

He switched his musical genre to gospel because of deep religious considerations. He told reporters that he has always been a church man. However, one can be a church goer and still not believe in the gospel with all his heart. Nathaniel makes music for those people whom don’t see the words of God as just empty phrases.

He literally grew up in a church where he sang in the choir and believed that music was the exact instrument that connected him with the Almighty. He traveled to other countries and earned money, although his late mentor, who worked in the Redeemed Christian Church of God, said that music should serve for something more than making a profit.

Everything changed for him when he was asked to compose a song for a day Stella Obasanjo was supposed to attend service and pray in his church; that was the moment Nathaniel experienced a spiritual revolution. When the composition was performed, he realized that this is exactly what he should be doing in life.

Before that he just wanted to be the best trumpeter and improve his skills from a technical point of view. While growing up, he dreamt of achieving glory, surrounding himself with charming girls and fans, travel abroad more, enjoy himself, have fun and study at a musical college.

It can be said that his sudden love for gospel music proved his maturity; he let go of all frivolous activities and began to think about more serious things.

Nathaniel Bassey is happily married to Sarah Bassey and they are blessed with two kids.

He fellowships at The Redeemed Christian Church.